Bobby Combs, Joe Bigogno and Mark Ferrell from Kansas City were in Fort Lauderdale for a convention and decided to charter the Top Shot Sportfishing Charter Boat team to do some deep sea big game sport fishing in Fort Lauderdale, Florida. They originally chartered the boat for Tuesday afternoon but had to reschedule a few days later.

Mark was interested in catching a Sailfish, so with that in mind, we stopped to purchase a dozen live Goggle Eyes to be used later in the charter. Fifteen minutes later, lines were in 120 ft. of water at the sea buoy in Fort Lauderdale, 1.8 miles from shore. If you venture out another ╝ of a mile you will find yourself in 500 ft. of water due to our extreme drop off. We started trolling with two #8 plainers down û one with a 3 ¢ blue reflector drone spoon and the other with a pink and blue sea witch in front of a double hooked Bonito strip. We had four Bonito strips for surface bait.

We trolled the reefs and the anglers caught some Bonitos and King Mackerel. From there we went over a wreck in 275 ft. of water and dropped a live Goggle Eye on the bottom. A few minutes later, the anglers caught a 45 lb. Amberjack.

It was time to head back to the dock. The anglers retired into the a/c salon and enjoyed the relaxing trip back to the dock at Bahia Mar Yachting Center, 801 Seabreeze Blvd., Fort Lauderdale, FL 33316, while watching the plasma TV. 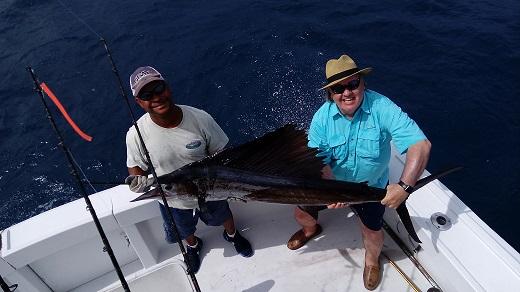